In my first Pocket Boom build I learned quite a few lessons, and came to the conclusion that a really efficient sound system was necessary.

I decided to ditch the stereo setup (what good is stereo if the speakers are so close to each other that you can’t tell one from the other?) and found an extremely small (50x25mm) and inexpensive (~$6 in a board with basic circuitry) 60W mono amplifier, the Texas Instruments TPA3118. I also bought the most efficient loudspeaker I could find at a reasonable price that did not require a huge cabinet, the Dayton Audio PS65LP-4. Once nailed down these two key parts, the only one left was the power supply, which, as I had learned, is tightly related to the overall sound power and distortion control.

Since the beginning I wanted to make use of my DeWalt power tool batteries, of which I have a few that I use for my power tools and have a charger for. They are 20V which is a very good rating for the TPA3118. they are not extremely capable, but off-brand higher capacity packs are not that expensive. Also, switching them up would be a breeze.

As with Pocket Boom #1, assembly was very easy, with very minimal soldering required. I had found an adapter for DeWalt batteries that I carved a bay in the back panel for, so that batteries could be removed and attached easily.

The initial setup that I did for evaluation purposes did not involve a battery but used an external power adapter. The sound volume was many times grater than the one of the previous project. The sound came up clean even at ridiculously loud levels. The Dayton may be frowned upon by “audiophiles” because it’s a car speaker, meant to fit in a car door and not in a cabinet. But since I did not care for “audiophile” quality, it turned out to be great for the purpose once I nailed down the right parameters for the enclosure. 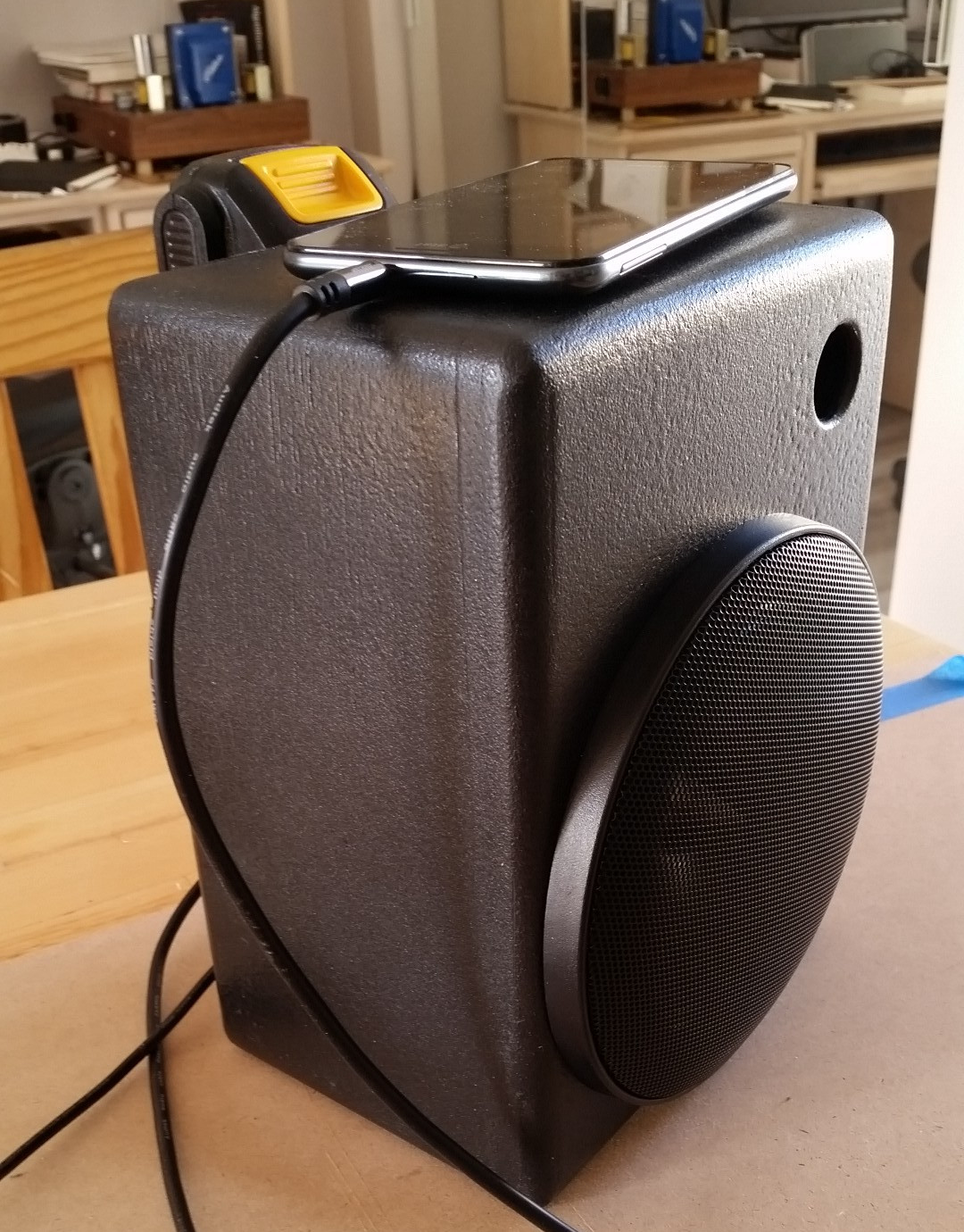 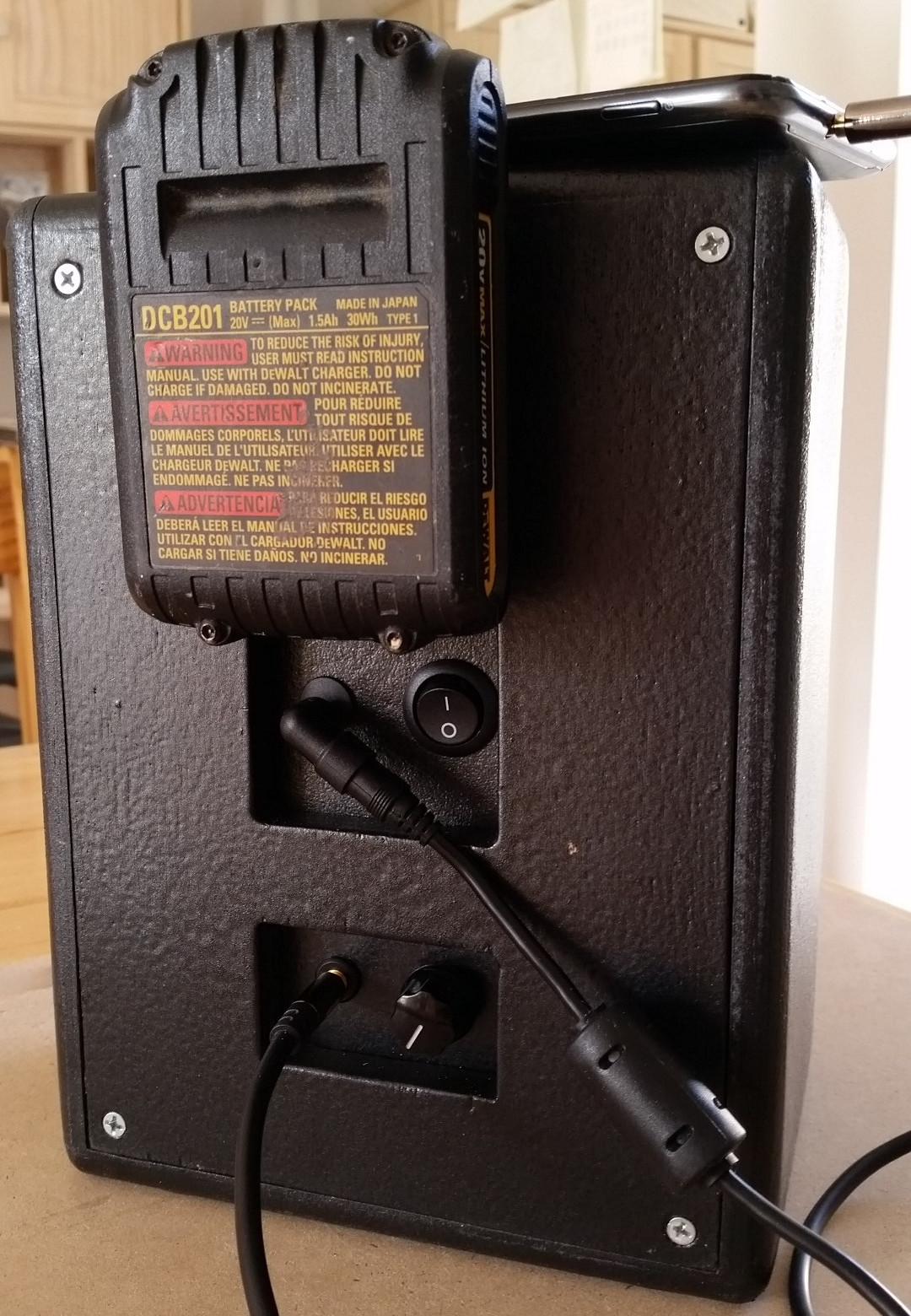 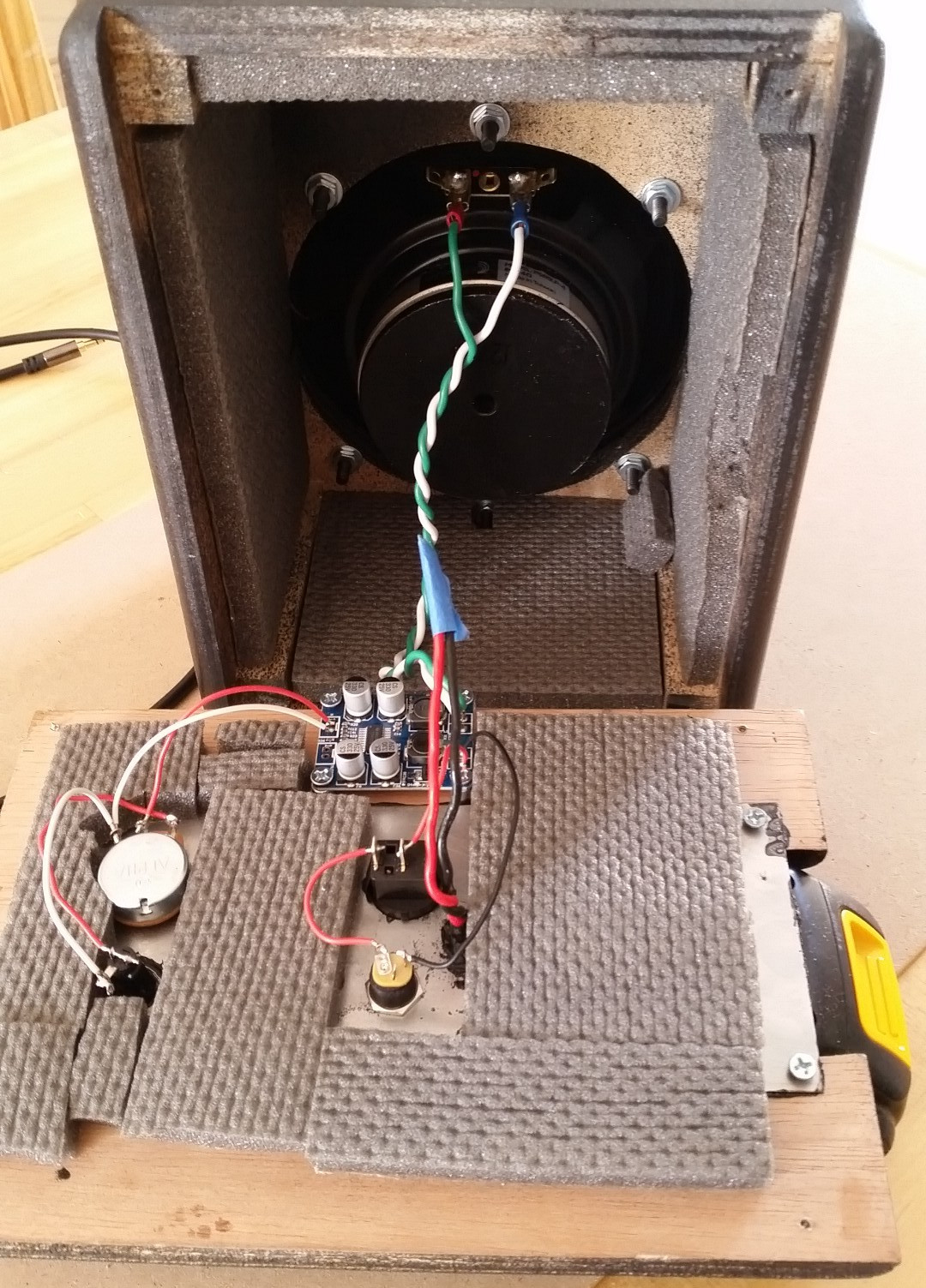 The difficult part came when I realized that my power tool batteries require a separate battery management system (BMS), which prevents the battery from burning out if it gets discharged below a critical level. That required some research and understanding of the problem, as well as a thorough modification of the DeWalt adapter that only had two connections, while I needed six for the BMS to work. Adding those contacts required some fine jewelry work on the part, but it turned out to work nicely at the end. 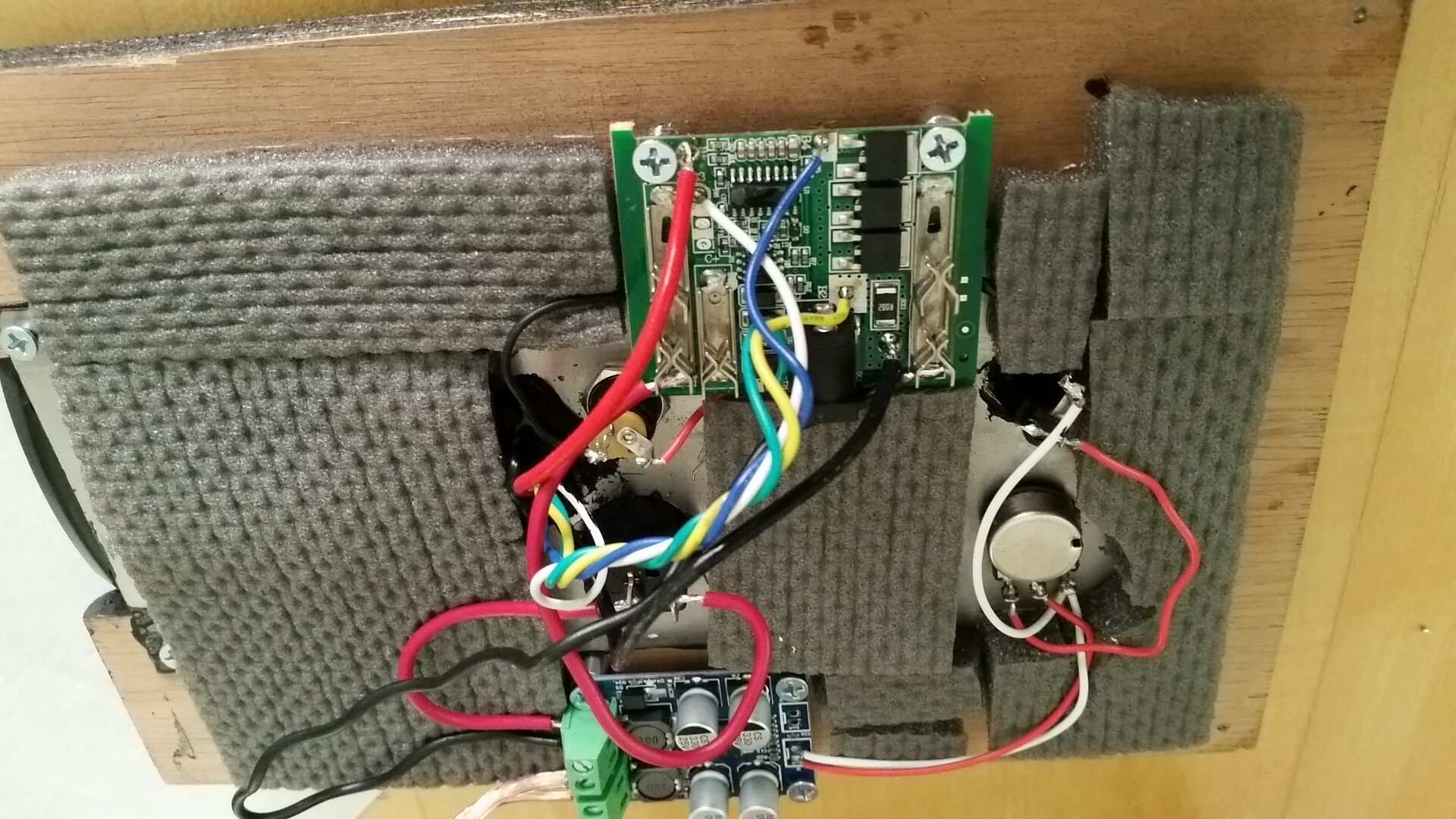 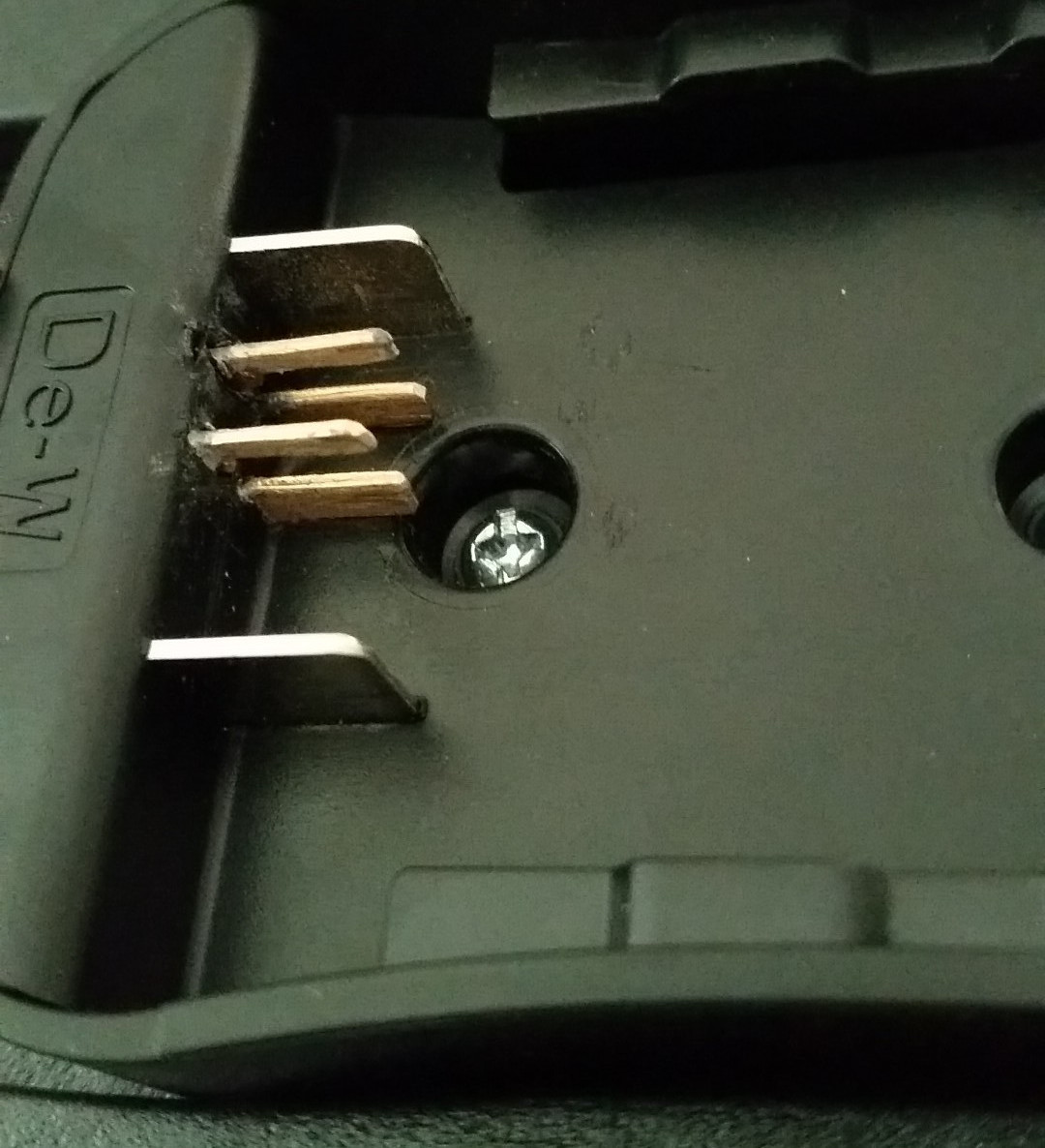 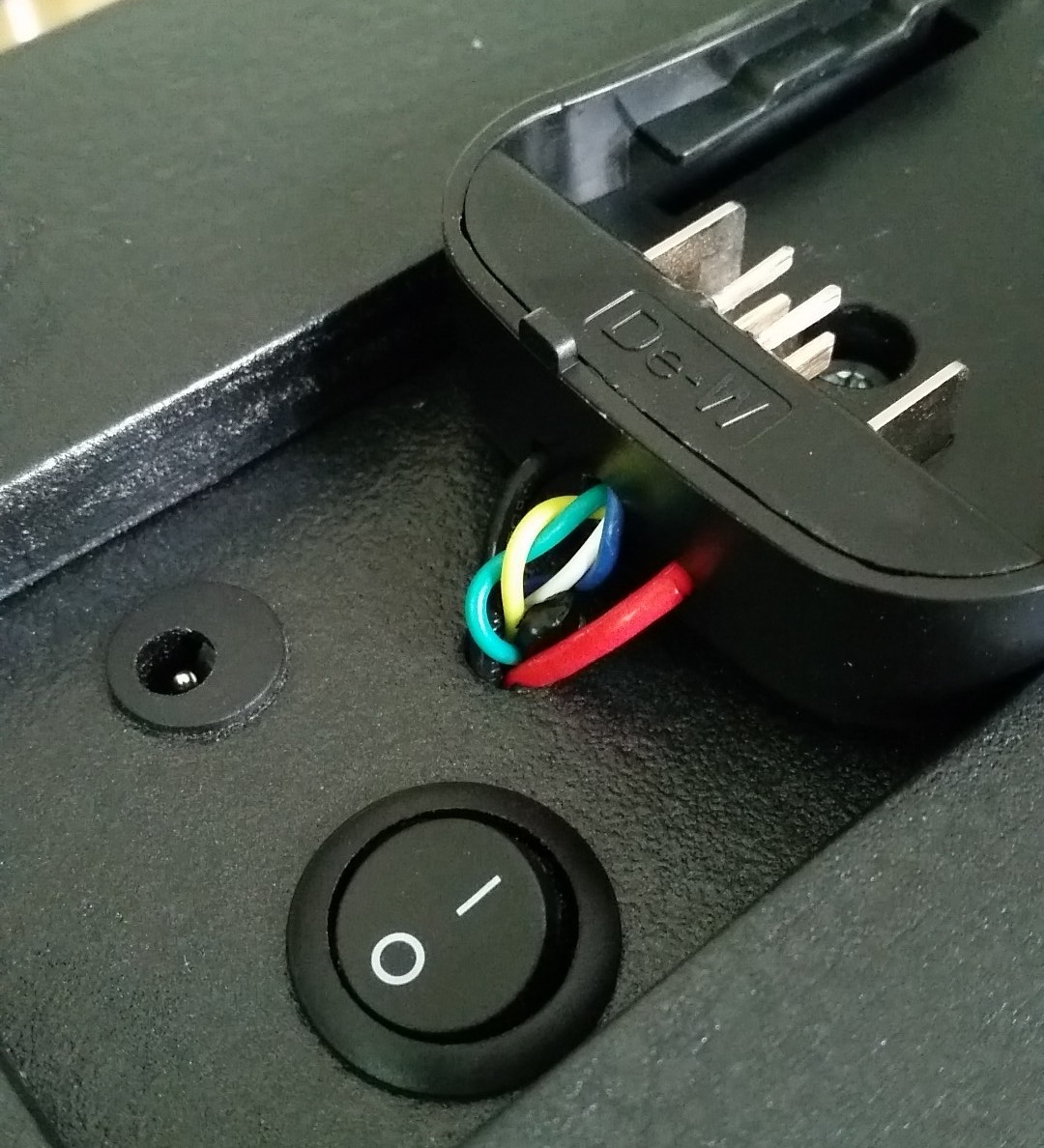 I never turned this thing up to the max because I didn’t need to. I can hear it clearly playing in the backyard from the front of the house. Bass is not super strong so I wouldn’t show off if any Jamaicans were around, but it’s satisfactory. The bass reflex outlet spits out puffs of air that tickle your belly if you stand in front of it while playing Dennis Ferrer. 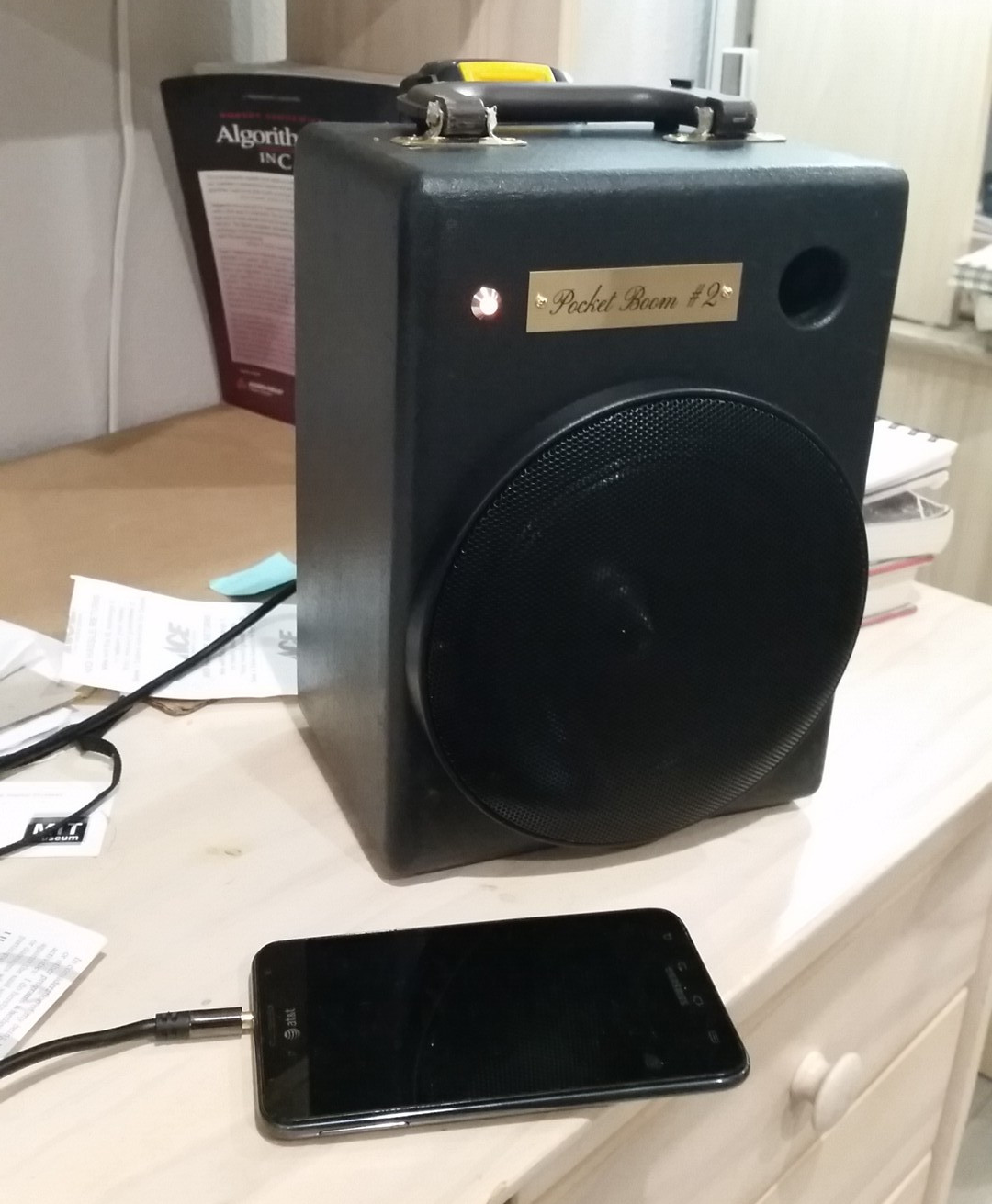 I believe I spent less than $150 for this, batteries excluded. It is many times more powerful and considerably smaller than the first project, because of the single speaker. One battery lasts over 6 hours at mild volume levels. Maybe next time I could use a battery pack as for Pocket Boom #1 because the adapter plus BMS was too much work for the advantage. But all in all I was so satisfied with it that I don’t think I will need to do any improvements for a while. I even caved in to vanity and gave it a power light and a brass plate with its name. I’ll need a leather suitcase handle because the cheap plastic one I found at the hardware store rattles at high volumes.